Presenting February 1 via Bandcamp: “Jesus Without Mary”, a new song by Mike Farmer. 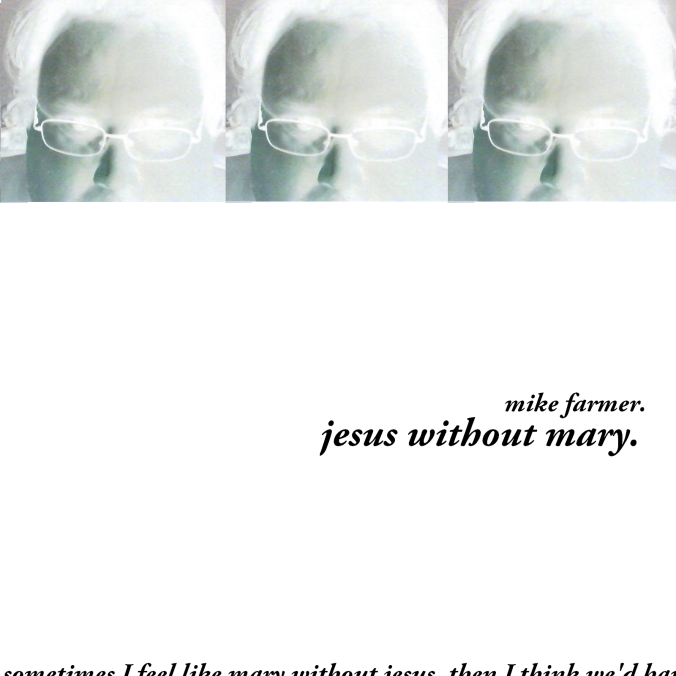 It is about four minutes and fifty-one seconds.

I have written many songs over the years. This is one of the better ones. The recording was done last December with significant help from my friend Russell Brooks. I don’t have the capabilities to record on my own so I try to make the most out of the rare times I can get help from others. I try to put my best song(s) forward, as I did here.

I hope this song insinuates itself into your dreams. I hope you play it over and over again because I AM GIVING THIS SONG TO YOU. I am not charging for download. It is yours if you want it.

There’s a good chance that this song gets overlooked by many. More than a good chance, actually. But soon I will release “Jesus Without Mary” and with it, let a piece of myself go forever.

I have two things to say. One thing for all the adults in the room and another thing for this kid and his family. 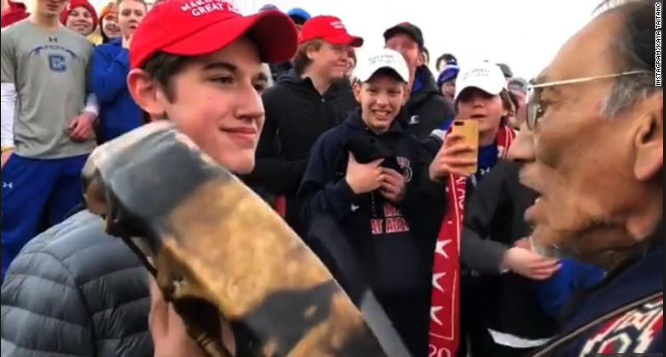 We’ll start with the greater point. Anti-bullying campaigns don’t seem to be working all that well. If kids are willing to get in the face of strangers, then classmates they’re familiar with don’t stand a chance.

Telling people that bullying doesn’t work DOESN’T WORK. You can’t make the world fair. You know who doesn’t think bullying is a problem? BULLIES. They are the hero and underdog of their life story, like most people cast themselves. Oh sure, the bullied understand that bullying is wrong. But try to explain that to some kid like the one trying to stare down our Native American friend above.

So what is the answer then? Because as much as it makes me sick to admit it, the cliche “boys will be boys” is kinda true. And the only thing that makes sense to me is some sense of cosmic justice being meted out on bullies. People like Donald Trump and Brett Kavanaugh are the exception rather than the rule, which is why they disgust us so. We keep waiting for them to get what’s coming to them. Which most people eventually do, bringing it on themselves.

Which brings me to the kid in that photo up there? I don’t know his name so let’s call him “Shithead”. Dear Shithead, do you like you’re getting punished unduly right now? That is cosmic justice for what you pulled the other day, sneering in the face of that brave man who chanted for peace and good energy. You were the antithesis of good energy and you are reaping that tenfold.

It is not entirely your fault, Shithead. The apple doesn’t fall from the tree. Your parents probably feel persecuted and that the world isn’t fair right now, either. Boys will be boys, right? No but here’s the deal, kid: fuck you and your family. You have that look in your eye that says “Yeah what are ya gonna do about it” and if Nathan Phillips were a lesser man he would have slapped that smirk off your pathetic private-school face.

You chanted “build the wall” at a group of protesting Native Americans and blacks who read the Bible in public. You have already built a wall between yourselves and everyone who isn’t like you. This photo and the videos that accompany it are your legacy. I would say you could cure cancer and still not be known for anything but this photo but we both know you won’t do anything close to that. You will never redeem yourself. You will always be Shithead. You are immortal now. Congratulations.